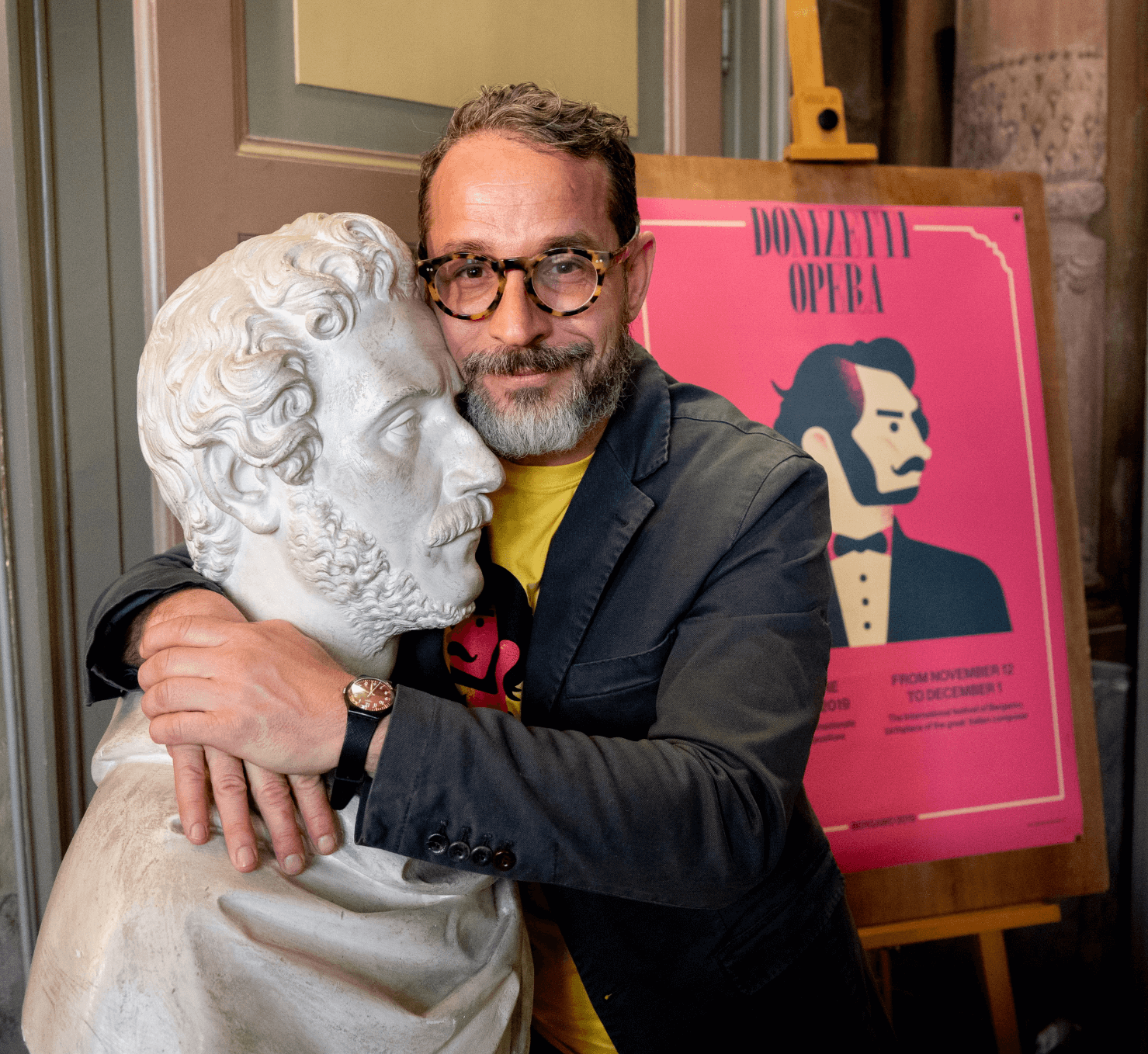 Open rehearsals, meetings, concerts, for a longer festival full of initiatives
Sing&Fly at the Milan Bergamo Airport: musical marathon in collaboration with SACBO and Ryanair

Rehearsals begin in Bergamo for the Donizetti Opera 2019 festival productions: an edition that officially inaugurated the 14th of November and it will be more extensive than the previous ones (three weeks), with an additional title thanks to the construction project in the Cantiere of Donizetti Theatre and a series of new activities that make the public increasingly involved and protagonist.

A festival that then begins again to take place in the main theatrical places of the city, at the Donizetti and the Sociale, but not only, proposing spaces to be discovered such as the historic townhouses or more unusual occasions such as the musical marathon made with SACBO at Milan Bergamo Airport, concerts in the funicular station symbol of the union of the two areas of the city in collaboration with ATB or the concert in the factory at the new Sinergia establishment in Albino.All this thanks to the precious support of sponsors and patrons who support the festival through Art Bonus, like UBI Banca and the group of Ambassadors of Donizetti.

The inaugural Gala (Teatro Sociale, Thursday, November 14th) is dedicated to them, entrusted to the musical director Riccardo Frizza with the RAI National Symphony Orchestra and a group of singers including the baritone Alessandro Corbelli and the soprano Carmela Remigio, artist in residence 2019.

The program includes pages by Verdi, Rossini, Auber, Donizetti, Wagner and Thomas linked to the theme of philtres, poisons and potions, which also includes one of the operatic masterpieces, Lucrezia Borgia (Teatro Sociale, November 22nd, 24th and 30th) according to the new edition criticism, with Frizza on the podium, directed by Andrea Bernard.

For the #donizetti200 project, Pietro il Grande (Teatro Sociale November 15th and 23rd, December 1st) will be staged, directed by Rinaldo Alessandrini and Ondadurto Teatro. In the Cantiere of Donizetti Theatre, L’ange de Nisida will come to life with the direction of Francesco Micheli and Jean-Luc Tingaud (November 16 and 21st) while on the 29th of November, for Donizetti’s Dies natalis, performance of the Messa di Gloria in Santa Maria Maggiore with the direction of Corrado Rovaris.

New formula for the public presentation of the works, entrusted to the scientific director Paolo Fabbri who will dialogue with the editors of the editions, in rooms adjacent to the theatres, at 6.30 pm, to allow participation also to those who then go to the show: Thursday 21 of November for L’Ange de Nisida with Candida Mantica at the Fausti Terrace; Friday 22nd of November for Lucrezia Borgia with Roger Parker at the Mai Library; Saturday 23rd of November for Pietro il Grande with Maria Chiara Bertieri at the Foyer of the Teatro Sociale. The meetings will be in Italian and English to involve also the foreign public.

The path of the three works towards the debut is then marked by a series of Open rehearsals through which one can get to know the productions, the performers and the professionalism that generally are behind the scenes.
For L’ange de Nisida it was built a journey of six appointments, which can be booked separately, in various locations around the city, from the intimacy of Casa Suardi, to the Palazzetto dello Sport up to the grandstand built for the occasion on stage in the Cantiere of Donizetti Theatre. To participate it is necessary to visit the dedicated webpage and follow the instructions for the seat reservation which is free except for the combined tests (November 9th and 11th, when there will be a ticket at the cost of 5 euros, to be paid at the ticket office within half an hour prior to the start).

On the occasion of the first World Opera Day scheduled for Friday 25th of October and promoted by Opera Europa, OPERA America and Opera Latinoamérica, the Donizetti Opera festival opens, at free admission, at the same time, the rehearsals of the three operas (reservations always on donizetti.org/festival ) and invites all fans to share the Donizetti world on social media with the #WorldOperaDay and #LoveOpera hashtags.

The opera weekends are also enriched this year with a series of chamber music concert appointments that will take place between the Birthplace and a choice of Historic Houses.
It starts on Saturday, November 16th (11 am) in the Ashbrook Room of Donizetti’s Birthplace with “Les italiens à Paris”, a concert by Ginevra Costantini Negri, pianist of eighteen years old, appointed Alfiere della Repubblica for artistic merit and for his commitment to diffusion of the Italian piano heritage, indicated by the Forbes magazine among the 100 under 30 Italian innovators and leaders of the future for their sector; an appointment realized in collaboration with the record label “Concerto Classics” with which the pianist records.

Massimo Spadano, first violin of the Donizetti Opera Orchestra, together with Daniela Pellegrino, at the fortepiano they will perform some chamber music by Donizetti at Palazzo Agliardi (Saturday, November 23rd, 11 am). The Orobie Wind Quintet returns, with the tenor Antonio Mandrillo and the baritone Gabriele Nani (Birthplace, Sunday, December 1st, 11am) with “Il fuoco dell’amicizia”, a program of pages by Donizetti and Mayr transcribed for the festival occasion.

During the last year, Donizetti and the festival have often been “on tour” in the neighbourhoods of the city with “Lucia Off” or in the schools of the territory with “Rita a spasso”; now instead the concert in the factory is a novelty: on the invitation of Sinergia SrL – an industry specialized in the design and construction of plants for the production, treatment, drying, filtration and separation of compressed air and technical gases – Arie nuove in Sinergia will take place, concert by the Donizetti Opera Orchestra on the occasion of the opening of the new factory in Albino with music by Donizetti and Beethoven directed by Alberto Zanardi.

To follow the program of the festival, which will be increasingly widespread between the Upper Town and Lower Town, the collaboration with ATB is fundamental, which, like in the big festival cities – Salzburg for all – guarantees to the Teatro Sociale ticket holders free entry on the public transport to access them and organizes dedicated shuttles for subscribers. Moreover, and here is the novelty, the moments of waiting in the low funicular station will be enlivened by brief musical moments.

A new partnership is the one between the Donizetti Opera festival and the Palazzetto Bru Zane, a French institution based in Venice that, in these days, has celebrated ten years of activity in favour of the study and rediscovery of the French romantic musical repertoire. A precious bond for all the French Donizetti that takes shape with a first activity in 2019: the scientific director of the Palazzetto Bru Zane, Alexandre Dratwicki, in fact, will follow, as linguistic coach, the Donizetti Opera Choir for the most correct preparation of the parts of the Ange de Nisida.

The festival cannot be without activities for the youngest, whose preparation follows the line of the school year: the previews of Pietro il Grande and Lucrezia Borgia (November 12th and 20th, 7 pm) are intended for high school and University students. A classic like Gaetano, Gioppino e l’elisir d’amore with Daniele Cortesi’s puppets will be staged for the very young (Auditorium di piazza Libertà, November 19th, 9.30 am).  Instead, for the elementary and middle schools Pietro il Piccolo (Teatro Sociale, November 27th, 28th and 29th) will be staged, reducing the work scheduled in the festival by Marialuisa Bafunno, Alice Guarente and Silvia Lorenzi with the coordination of Michele Balistreri, Paolo Ferrari and Francesco Micheli, with a staging project specifically designed by Ondadurto Teatro.