Donizetti Opera 2019: the details about cast and concerts – and a new Orchestra 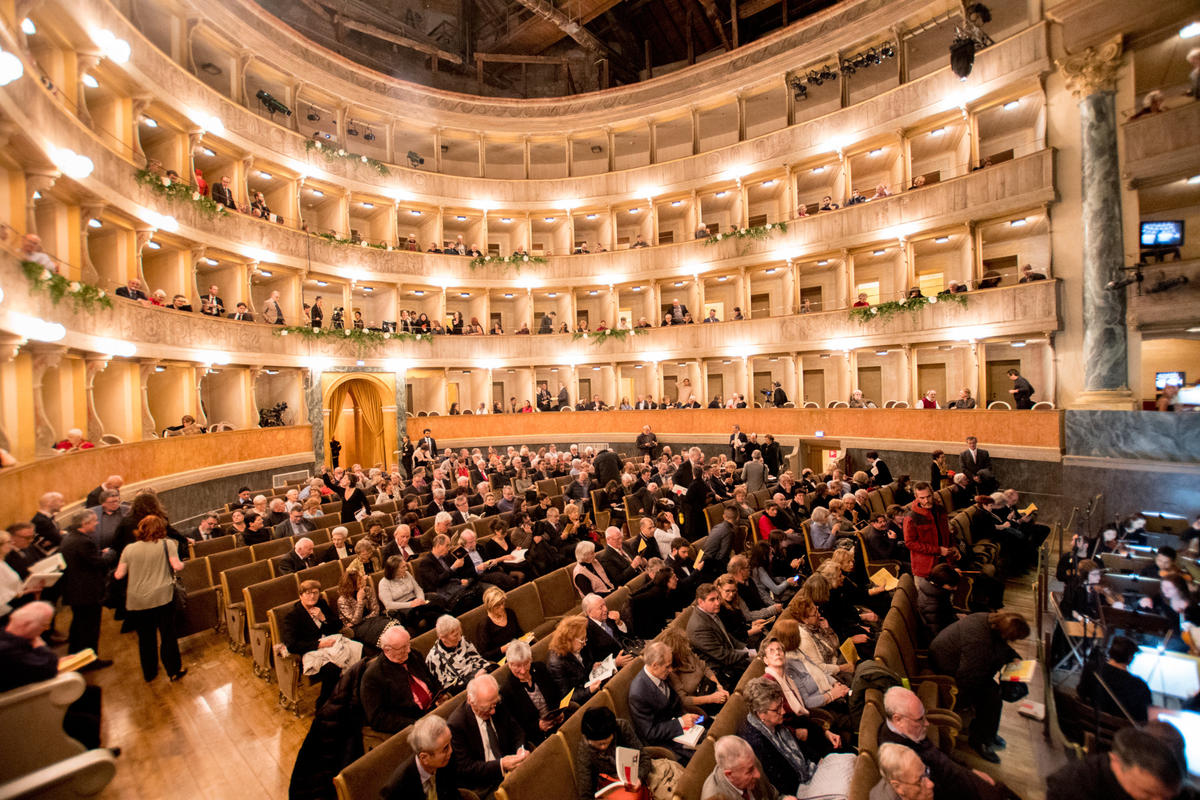 Donizetti Opera 2019: the details about cast and concerts – and a new Orchestra

In 2019 the festival grows and presents an operatic title more than in previous years: Pietro il Grande for the #donizetti200 project, the first staging of the Ange de Nisida signed by Francesco Micheli, the new critical edition of Lucrezia Borgia.

Bergamo was proclaimed in the Municipality “City of Gaetano Donizetti”

The calendar of the fifth edition of Donizetti Opera is available, an international festival dedicated to the composer from Bergamo and with the artistic direction of Francesco Micheli: the first news of 2019 is the extended programming, thanks also to a third operatic title.

In this way the formula that sees the works intertwine in the three weekends around the Dies natalis (November 29th) together with a series of daily appointments (open rehearsals for the under 30s, a show for children, chamber concerts, sacred music, vocal recitals) is further strengthened, forming a program addressed to an ever increasing local and international audience.

The Donizetti rediscovery project goes hand in hand with the life of the city: the municipal administration, in fact, a few days ago proclaimed Bergamo “City of Gaetano Donizetti” also giving it a trace in a renewed road sign.

In this atmosphere of collective participation we are preparing to welcome the peaceful invasion of enthusiasts from all over the world from November 12th to December 1st. The activity of study and research on the legacy and codification of Donizetti’s musical opera identity remains constant, entrusted to the care of the scientific section of the Donizetti Theatre Foundation, directed by Paolo Fabbri.

The Donizetti Opera Festival 2019 starts with an Inaugural Gala, on Thursday November 14th at Teatro Sociale: on the podium the musical director of the Festival Riccardo Frizza who is at the head of the RAI National Symphony Orchestra in a program dedicated to the music of the Orobico composer.

During the day of Dies natalis by Gaetano Donizetti, Friday November 29th, in the Basilica of Santa Maria Maggiore his Messa di Gloria will be performed, a new piece of the rediscovery of the sacred repertoire of the composer entrusted to the baton of Corrado Rovaris, on the podium of the Orchestra Donizetti Opera; Serena Farnocchia (soprano), Varduhi Abrahamyan (mezzo-soprano), Giulio Pelligra (tenor) and Roberto De Candia (bass) form the vocal cast.

In order to continue the #donizetti200 cycle –  the every year staging of a work by Donizetti that is two centuries old – the title of 1819 Pietro il Grande kzar delle Russie was chosen (from November 15th to 23th, December 1st, under30s preview on November 12th), with the sheet music edited by Maria Chiara Bertieri based on the only two surviving sources: the autograph manuscript (preserved in the Ricordi Historical Archive) and a manuscript copy of the first act only without the symphony (preserved in the Donizetti Museum of Bergamo).

Rinaldo Alessandrini will be the Concert master, who is expert in ancient repertory and in the recovery of executive procedure, he is at the head of the new orchestra promoted by the Donizetti Theatre Foundation and called Gli originali, which is born from the meeting with Enrico Casazza and from the desire of Frizza and Micheli to propose the execution of early nineteenth century works with historical instruments.

Gli originali will also be engaged in the expected concerts in historic Bergamo houses. The direction is instead entrusted to Ondadurto Teatro composed by Marco Paciotti and Lorenzo Pasquali, who are also creators of the machinery and set design for a show based on their usual and expansive physicality; the costumes will be signed by K.B. Project and the lights by Marco Alba.

The vocal cast sees the baritone Roberto De Candia in the role of Pietro, also in his debut at the Donizetti Opera. The role of Caterina is entrusted to Loriana Castellano, that of Madama Fritz to Paola Gardina. Francisco Brito as Carlo Scavronski, and Ser Cuccupis will be instead Marco Filippo Romano.

Great expectation for the world premiere in scenic form of the work L’ange de Nisida (November 16th and 21st), a sheet music that was believed lost after the fail debut in 1839 and that instead was recovered and rebuilt by Candida Mantica, young researcher from Calabria with a doctorate at Southampton University, and who have worked for eight years on manuscript papers at the Bibliothèque Nationale de France in Paris, scattered in 18 containers in which she was able to identify about 470 handwritten pages by Donizetti, thanks also to a copy of a draft of the booklet kept in Bergamo.

The philological reconstruction will be framed by the building reconstruction, because the rediscovered opera (already performed last summer in London in the form of a concert) will finally be staged in the Teatro Donizetti construction site next to complete reopening.

The staging of the “doppia rinascita” – with the direction of Francesco Micheli, the scenes of Angelo Sala and the costumes by Margherita Baldoni – indicated internationally as an unmissable event, is arousing with great anticipation the interest of the public and the critics and dozens of booking and credit requests have already been received.

For the occasion, the Donizetti Opera Orchestra will be directed by Jean-Luc Tingaud, with Florian Sempey in the role of Don Fernand d’Aragon, Paul Gay as Don Gaspar, Francesco Demuro as Leone de Casaldi and Salome Jicia in the role of Comtesse Sylvia de Linarès.

The third operatic title is one of the most beloved Donizetti’s masterpiece, Lucrezia Borgia (November 22nd, 24th and 30th; Under30s preview on the 20th of November), in a staging based on the new edition edited by Roger Parker and Rosie Ward, which resumes the fundamental collaboration with Casa Ricordi (for thirty years standard bearer of the National Critical Edition of the Works of Gaetano Donizetti in agreement with the Municipality of Bergamo and with the  Donizetti Theatre Foundation).

The performance is entrusted to the baton of Riccardo Frizza (Carla Delfrate will be on the podium on the 30th of November) who will conduct the Orchesta Giovanile Luigi Cherubini. In the role of the title there will be the soprano Carmela Remigio and, in the guise of Gennaro there will be the tenor Xabier Andauaga – both veterans from the success of Castello di Kenilworth -; and Marko Mimica will be Don Alfonso d’Este, Varduhi Abrahamyan will be Maffio Orsini.

The new layout of the Donizetti Theatre Foundation directed by Andrea Bernard, the scenes and costumes designed respectively by Alberto Beltrame and Elena Beccaro and lights by Marco Alba, is the result of an important territorial co-production with the Teatri of Reggio Emilia Foundation, the Teatri di Piacenza Foundation and the Ravenna Manifestations Foundation, where the show will be staged immediately after the Bergamo dates.

There will be two choral teams involved in the productions: the Donizetti Opera Choir directed by Fabio Tartari who will be involved in the Inaugural Gala, the Messa di Gloria and in Pietro il Grande and Ange de Nisida; the Choir of the Municipal Theatre of Piacenza directed by Corrado Casati is instead in the Lucrezia Borgia.

The Donizetti Educational section continues and grows, to emphasize the figure of Donizetti as a Master of Emotions and to enhance the intrinsic multidisciplinary of the opera itself. Even for the school year 2018/2019 a set of educational and training activities linked to the titles of the Donizetti Opera festival is scheduled.

The project, consisting of a wide and diversified range of proposals, will adapt to the different age groups and the various school levels, favoring not only an approach to the opera, but also an effective and compelling involvement.

The primary and secondary schools of the first grade will be able to attend an unprecedented version prepared for them starting from the work Pietro, il Grande, which is titled Pietro il Piccolo (November 27th, 28th, 29th). Teachers will be able to attend a training course conducted by the directors and the registrar’s office, during which the opera and activities that the students do during the show, vocal tracks, disguises and objects constructed in the classroom will be presented. The reduction of the work and the educational activities connected to it are the result of shared work together with the registrar’s office selected in 2018 by “Donizetti con una Z”.

In the second part of the school year, the nursery, primary and secondary schools of the first grade will be able to carry out an activity of discovery of Donizetti, through an interactive visit of the Native Home and of the Teatro Sociale and a direct laboratory experience of one of the codes of lyric opera (visual, verbal and musical), also through a didactic progression of several meetings held directly at school.

Instead, the secondary school of the second grade will be able to attend the dress rehearsal of Pietro, il Grande (November 12nd) and Lucrezia Borgia (November 20th), to which they will arrive prepared thanks to an interactive training course of opera training carried out in class by our collaborators.

The Donizetti Opera Festival will be preceded by two important dates: on the 12th of April at the Teatro Sociale (8:30 pm), Francesco Micheli will be on the stage for the Donizetti Revolution vol. 5, the presentation-show to introduce the public to the next edition of the Festival in the company of the soprano Marta Torbidoni and the pianist Sem Cerritelli (last free tickets available on gaetanodonizetti.org).

On the 15th of June Donizetti Night will return, the long-awaited city festival that every year gathers thousands of people and this year will liven up the centre of Bergamo with hundreds of artists working on dozens of stages, all in the name of Gaetano Donizetti.

The Donizetti Opera Festival is organized by the Donizetti Theatre Foundation and by the Municipality of Bergamo with the support of Minister for Heritage and Cultural Activities, Cariplo Foundation, Lombardy Region, Chamber of Commerce of Bergamo, in collaboration with Donizetti Foundation, Gaetano Donizetti Conservatory, Mia Foundation, Opera Europa, Sacbo, Atb with the contribution of ABenergie, the light of Donizetti Night, San Lucio Events, Stucchi spa, charity partner media partner Classica.

A special thanks to the Ambassador of Donizetti that support the activity of the Foundation with Art bonus: