Donizetti Opera 2020: the festival will not stop and moves online and on Rai5 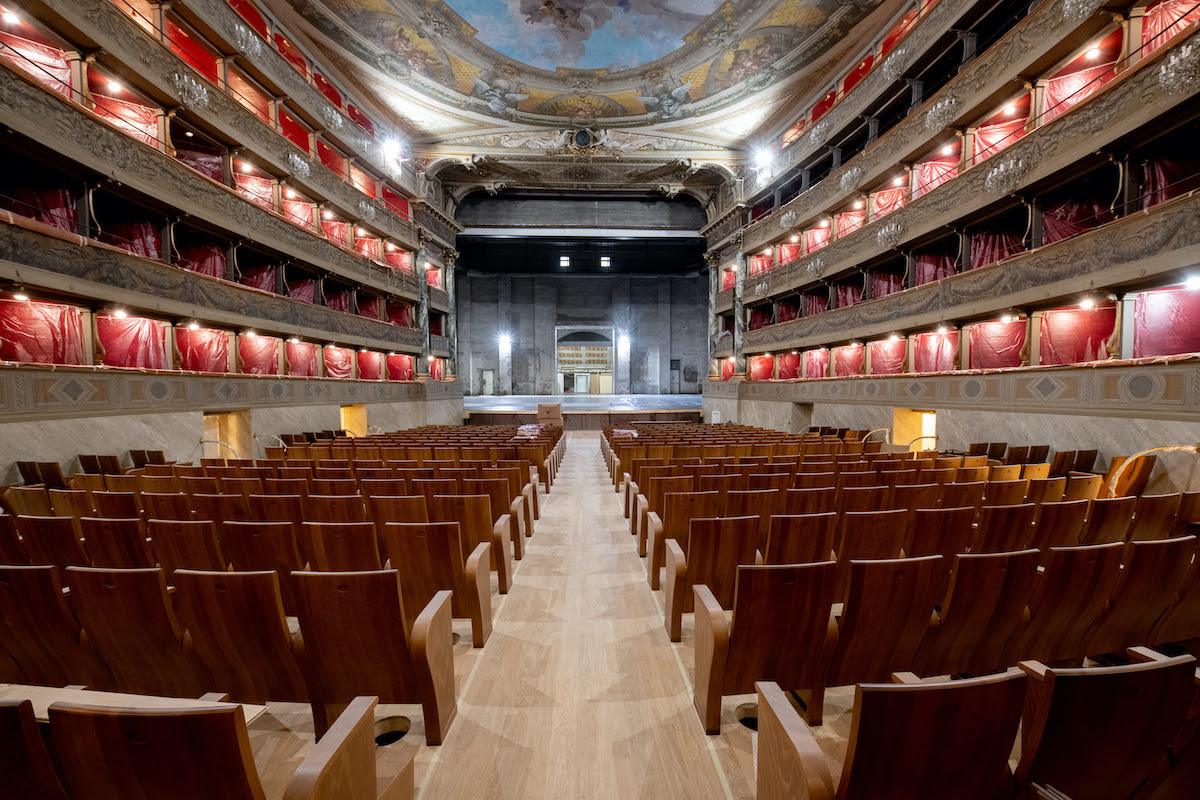 Donizetti Opera 2020: the festival will not stop and moves online and on Rai5

Preparations for the titles of the sixth edition of the Donizetti Opera 2020 festival are proceeding at a fast pace, in full compliance with anti-Covid health protocols: the three scheduled Donizetti operas will make their debut in the restored Donizetti Theatre in less than two weeks and will be visible all over the world through the new Donizetti Web TV, created thanks to Fondazione TIM on donizetti.org/tv.

The stringent provisions linked to the DPCM of 3 November and the consequent temporary impossibility to welcome spectators within the theatre forced us to partly rethink the festival and the new schedule of the online programme will be as follows: Friday, 20 November, Marino Faliero (streaming) but also live on Rai5 thanks to the commitment of Rai Cultura to bring the shows produced in this period on TV; Saturday, 21 November, Belisario (streaming); Sunday, 22 November, Le nozze in villa (streaming). Each debut is scheduled for 8 p.m. and will be preceded by a presentation from 7.30 p.m. onwards. The recorded videos of the three performance will then be available to all web TV subscribers for the entire period of the festival, i.e. until 6 December.

The DPCM has also decreed the impossibility to welcome audiences within the theatres for the second weekend; therefore, those in possession of tickets and carnets (sets of three tickets) for the two weekends will receive a specific communication; for the performances on 5 and 6 December, we are waiting for the upcoming measures the government will take to contain the pandemic.

The artistic director Francesco Micheli and the musical director Riccardo Frizza, as well as the entire Donizetti Theatre Foundation, have thus confirmed their commitment to the artists involved and to the affectionate audience of the Donizetti Opera, who have shown affection and sympathy, by confirming until a few days ago the tickets booked back in February.

The fourth scheduled title, the opera L’amor coniugale by Donizetti’s master, Giovanni Simone Mayr, scheduled at the Teatro Sociale on 4 December to mark the 250th anniversary of Beethoven’s birth, is currently postponed to a future edition of the Festival; the recitals by Xabier Anduaga and Sara Blach with Paolo Bordogna have also been cancelled.

The Donizetti Opera festival will not stop thanks also to the support of Allianz, AB Energie, Curnis – Rolex, Terna, Uniacque and IGP Decaux as well as of the Donizetti Ambassadors, which include more than 25 businesses in the area close to the theatre.

The creation of the new web TV of the Donizetti Opera festival has been made possible thanks to the TIM Foundation which, with its fundamental contribution, has decided to support the spread of the classical music culture and of the figure of Gaetano Donizetti from his hometown to the boundless web audience, with the aim of encouraging a wider participation in the cultural and musical life of our country.

Access to the “Donizetti Web TV” is free and gives the opportunity to watch special contents suche as the “Donizetti Revolution vol. 6” (available online since 31 October) and several archival proposals. The full programme dedicated to the 2020 Festival, including the live streaming of the shows, are instead available only for subscribers to the web offer. The subscription to the “Donizetti web TV” (including the streaming of the 2020 operas and original contents) costs 59 euros; access to each single opera costs 30 euros. Payment can be made directly online by credit card or PayPal. Considering that the ticket office is closed to the public, the festival is nevertheless committed to providing telephone support for non-digital natives, both for subscription activation and payment (T. 035 4160601/602/603).

The Donizetti Opera festival has developed specific offers for those who bought tickets for the first and second weekends, with different degrees of participation and the possibility to join the #iorinuncioalririmborso campaign which in recent months has supported international theatres, thus transforming each spectator into a donor. Those who will not apply for a refund of amounts over €59 will receive free access to web TV as well as a series of benefits depending on the amount donated (for information and subscriptions partner@fondazioneteatrodonizetti.org).

– you will become Donor Elisir if you donates the entire amount of the ticket (if more than 59€), and you will have full access to the Web TV, priority on 2021 tickets, acknowledgements on the Festival page dedicated to Donors, free download of all the opera booklets with the librettos and listening guides;

– you will become Donor Ange if you donate the entire carnet and you will have full access to the Web TV, priority on 2021 tickets, acknowledgements on the Festival page dedicated to Donors, two talks reserved for Platinum Donors on Zoom with Francesco Micheli and Riccardo Frizza to discover all the secrets of the Festival, the Gift directly at home with the celebratory t-shirt of the Festival, the 2020 poster signed by Plácido Domingo, all the posters and opera booklets of this edition.

ARTISTS AND WORKS OF 2020 FESTIVAL

The “digital” weekend of the Donizetti Opera 2020 festival will open on Friday 20 November (from 7.30 p.m.) with Marino Faliero (critical edition by Maria Chiara Bertieri) live thanks to Rai Cultura on Rai 5, directed for television by Arnalda Canali. The musical director Riccardo Frizza will return to the podium, while the creative project will be entrusted to ricci/forte, a duo of directors who have recently been nominated to the direction of the Biennale Teatro in Venice and who have conquered opera audiences with a series of successes in recent years (from their operatic debut with Turandot at the Sferisterio, Abbiati Award 2018, to Nabucco at the Festival Verdi in 2019) and who were asked to stage this complex story set in Venice in the fourteenth century, a mixture of politics and sentiment. Staged at the Théâtre Italien in Paris – the most fashionable theatre at the time with Rossini as part of the management – on 12 March 1835, Marino Faliero boasted a cast of first-rate virtuosos (Luigi Lablache, Antonio Tamburini, Giulia Grisi, Giovan Battista Rubini), which caused a bitter rivalry with Bellini, who had just staged I Puritani in the same theatre. Inspired by such a legendary first cast, in the 2020 version of this opera some of today’s greatest performers will tread the boards of the Donizetti Theatre: the bass Michele Pertusi in the title role, the tenor Michele Angelini (who will replace Javier Camarena, who was scheduled to be in the cast but is unfortunately unable to come to Bergamo), the soprano Francesca Dotto and the baritone Bogdan Baciu. The cast will be completed by:  Christian Federici, Dave Monaco, Anaïs Mejías, Giorgio Misseri, Stefano Gentili, Diego Savini, Vassily Solodkyy, Daniele Lettieri, Enrico Pertile, Giovanni Dragano, Angelo Lodetti and Piermarco Vinas Mazzoleni. The scenes are by Marco Rossi, the costumes by Gianluca Sbicca, the lights by Alessandro Carletti and the choreographic movements by Marta Bevilacqua.

For the second appointment on Saturday, 21 November (at 7.30 p.m.), we will have the opera in concert form, Belisario (Venice, 1836 – critical edition by Ottavio Sbragia): the title role will be played by Placido Domingo, who was fascinated by Bergamo and the festival dedicated to its composer, and thus decided to debut a new character for his baritone repertoire. The musical director Riccardo Frizza will stand on the podium of the Donizetti Opera Orchestra, together with an exceptional cast including Simon Lim, Carmela Remigio (who will replace Davinia Rodriguez, who was scheduled to be in the cast), Annalisa Stroppa, and Celso Albelo, also joined by Anaïs Mejías, Klodjan Kacani, Stefano Gentili, Matteo Castrignano, and PiermarcoVinas Mazzoleni.

The first weekend closes on Sunday, 22 November with the 2020 title of the #donizetti200 cycle (the annual staging of an opera by Donizetti that turns two centuries old): the opera buffa Le nozze in villa (streaming live at 7.30 on the Web TV), in the new critical edition by Edoardo Cavalli and Maria Chiara Bertieri. It is a little-known work that has come to us through a single surviving score, which is not autographed and is unfortunately incomplete, without direct evidence of its first performance. Following the tradition of the #donizetti200 project, on the podium we will see Stefano Montanari, a specialist of the ancient repertoire for the rediscovery of Donizetti’s sound thanks to the presence of the Orchestra Gli Originali. The missing musical section (the quintet of the second act “Aura gentil che mormori” n. 10) was instead commissioned to the contemporary artists Elio and Rocco Tanica, in collaboration with Enrico Melozzi. To tell the story of a couple in love struggling with a father and a groom-to-be with caricatured and ridiculous outlines, there will be the young director Davide Marranchelli, winner in 2019 of the selection for a new work for the Donizetti Night (Don Gaetano – A Speed Date With). Scenes are by Anna Bonomelli, costumes by Linda Riccardi and lights by Alessandro Carletti. We will also have a group of experts in the buffo repertoire of the early nineteenth century, such as Fabio Capitanucci, Omar Montanari, Gaia Petrone, Giorgio Misseri, Manuela Custer, Claudia Urru and Daniele Lettieri.

In compliance with safety distances, the Orchestra and the Choir will always be arranged on stage, while the dramaturgical action will take place in the stalls.