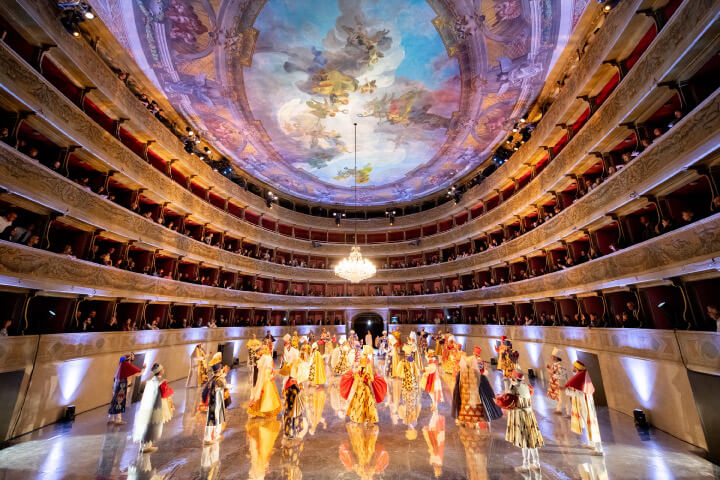 The jury of the 39th edition of “Abbiati” Award has nominated the winners for the year 2019: the Special Award goes to a production of the Donizetti Opera festival, the world premiere in stage form of the Gaetano Donizetti’s opera L’ange de Nisida with the direction of Francesco Micheli at the Site of Donizetti Theatre in Bergamo last November.

«We are delighted to receive the news of this award during such a difficult period – Francesco Micheli states excitedly – The recognition of the critical is important for all of us, because it further enhances the dialogue between fathers and sons that animates the Donizetti Opera festival as an example of the continuous dialogue between Donizetti and Bergamo, between the past and the present, between the brilliant artistic legacy of our composer (partly yet to be rediscovered) and the industriousness inherent in its territory.

We thank all the artists involved in the production of L’ange de Nisida, starting from my travelling companion, the musical director of the festival Riccardo Frizza, who has encouraged the formation of the orchestral and choral staff and the cast of splendid performers with whom Jean Luc Tingaud read the score reconstructed by Candida Mantica.

The success has to be shared with all the technical and organisation staff of the Foundation, with the Municipality and also with the workers involved in the restorations, who made those memorable evenings possible in the site of the Theatre, whose imminent reopening is now crowned by a first authoritative laurel ».

The score of L’Ange de Nisida, which was believed lost after the missed premiere of 1839, was recovered and rebuilt by Candida Mantica, young Calabrian researched with a PhD from Southampton University, who worked for eight years on the manuscript sheets at the Bibliothèque National de France in Paris, managing to identify around 470 manuscript pages of Donizetti, also thanks to the copy of a draft of the booklet kept in Bergamo.

The staging of the “double rebirth” – with the scenes of Angelo Sala projected onto the floor which then became a mirror, and the colourful paper costumes of Margherita Baldoni – provided for the performance of the show in the space of the audience, the orchestra in the hole but turned towards the stages and the audience on the stages and on a grandstand built for the occasion on stage.

The debut had been preceded by a path of six rehearsals open to the city, which allowed more than 1500 inhabitants of Bergamo to enter in advance into the site and to discover the opera and the production processes of the show, according to an idea rooted in the festival of territorial action.

The show was recorded by Dynamic and will be available in September on DVD/BluRay.

The restoration of the Donizetti Theatre – which saw the commitment of the Ministry for Cultural Heritage and Activities and Tourism, the Municipality of Bergamo and the Lombardy Region – was made possible thanks also to a group of private donors who contributed to half of the total cost of the work.

To this patrons so sensitive and engaged in restoration, to the sponsors of Donizetti Opera festival and Donizetti Ambassadors, a special group of ten companies from Bergamo was then joined, which– with a total contribution of about 200,000 euros – made the realization of L’Ange de Nisida in the Theatre Site possible: Ambrosini Carni, Automha, Dufry, Faip, Pesenti Foundation, Framar, Pellegrini, Perrel Utensili Fratelli Magoni, Siad and UBI Banca.