The autographed score of Donizetti’s Lucia di Lammermoor arrives to New York from Bergamo for the new production at the Metropolitan Opera, conducted by Riccardo Frizza 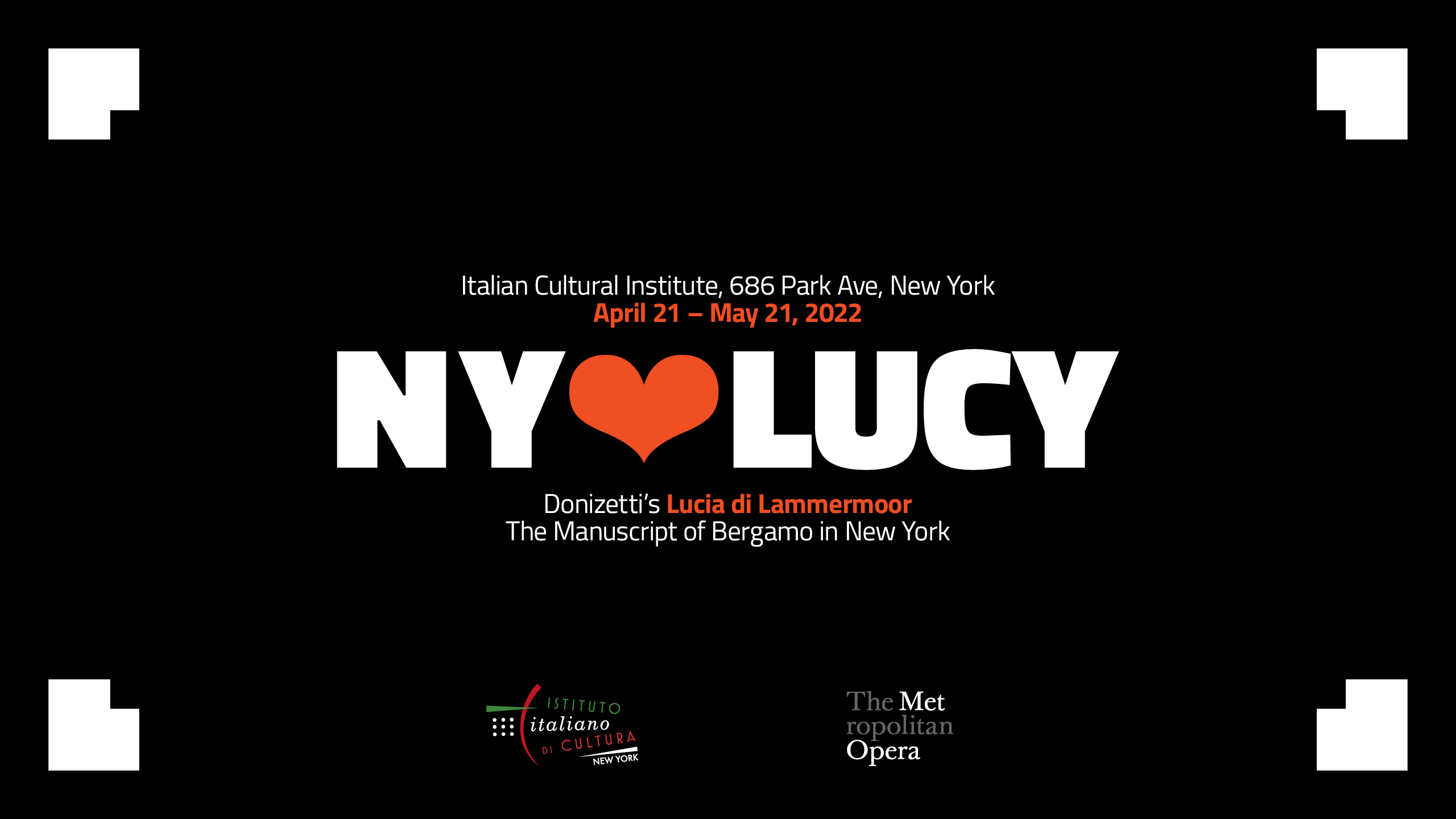 The autographed score of Donizetti’s Lucia di Lammermoor arrives to New York from Bergamo for the new production at the Metropolitan Opera, conducted by Riccardo Frizza

Lucia di Lammermoor is undoubtedly, together with L’elisir d’amore, the most famous opera by Gaetano Donizetti and the most performed throughout the world. Thanks to a 1985 donation by the Perolari family, the city of Bergamo was able to acquire the autograph score of this opera, which was first performed at the San Carlo Theatre in Naples in 1835. The score is preserved in the Mai Library. In a few weeks this precious manuscript will travel across the ocean for the first time to be exhibited at the Italian Cultural Institute in New York directed by Fabio Finotti on the occasion of the new, highly anticipated production of Lucia di Lammermoor at the Metropolitan Opera. The production will be conducted by Riccardo Frizza, who is also the music director of the Donizetti Opera Festival in Bergamo.

“Lucia di Lammermoor is a masterpiece – remarks Fabio Finotti, director of the ICI in New York – both in the original novel by Walter Scott and in Donizetti’s adaptation. It confronts us with extremely topical issues: women, their silences, their suffering, and the censorship they have inflicted on themselves for centuries. Lucia di Lammermoor somehow is Freud before Freud. The Italian Cultural Institute in New York is therefore proud to host the token of a universal masterpiece.”

“Thanks to this invitation from the ICI – says Nadia Ghisalberti, Councillor for Culture of the Municipality of Bergamo – the autograph manuscript of the score of Lucia di Lammermoor, a precious heritage of the city of Bergamo, preserved with care, expertise, and love in the Civic Library, will fly to New York, and become a concrete testimony to the great music of Gaetano Donizetti and an ambassador of the world of melodrama, a side of Italian culture for which we are universally praised. And by being exposed, this ancient document will also tell the story of the city of the great composer, which in 2023 will be the Italian Capital of Culture.”

“This is an extraordinary occasion, – says Maria Elisabetta Manca, head of the “Angelo Mai” Civic Library and Historical Archives in Bergamo – because Donizetti’s manuscript, which is seldom exhibited in the city, is on its first international loan. The Library has preserved it since 1985, when the Perolari family from Bergamo generously gifted it, and it represents one of the most precious specimens of our huge music collection which includes over 50,000 manuscripts and prints, several hundred music librettos and sound documents as well as a wide bibliography on music.”

On 21 April, at the ICI premises on Park Avenue, a round table will be organized with the participation of Riccardo Frizza, musical director of the Donizetti Opera Festival, and the contribution of some videos prepared in Bergamo showing Bergamo and the treasures of the “Angelo Mai” Library.

It will also be an opportunity to present the critical edition of Lucia di Lammermoor edited by Gabriele Dotto – who will be at the ICI – and Roger Parker, published a few months ago by Ricordi as part of the National Edition created with the collaboration and contribution of the Municipality of Bergamo and the Fondazione Teatro Donizetti.

The manuscript, consisting of 181 bound sheets in a volume measuring 370×270 mm, will be placed on display inside a special air-conditioned showcase specially created by Arterìa – a leading company in Italy for the packaging, transport and installation of works of art – in full compliance with the prescriptions for the protection of the property.

The new production of Donizetti’s Lucia di Lammermoor at the Metropolitan Opera premieres Saturday 23 April, with an additional eight performances through Saturday 21 May. The Saturday 21 May performance will also be transmitted live to cinemas across the world as part of The Met: Live in HD series and broadcast live over the Toll Brothers-Metropolitan Opera International Radio Network. Australian director Simon Stone makes his Met debut with a staging that sets the classic opera in modern-day America, starring soprano Nadine Sierra in the title role opposite tenor Javier Camarena—well-known to the audience of the Donizetti Opera Festival—as Edgardo.

The documentation of the exhibition of the manuscript score of Lucia di Lammermoor in New York, as well as the textual contributions that are being prepared, together with some videos and in-depth studies, will also be available on the stanzeitaliane.it platform, which has been the virtual museum of the ICI for a year: a way of making the whole documentary work available to scholars and audience who cannot be in New York.